The iPad is an exciting evolution for developers and end users, but there are no any comprehensive pre-built GUI resources for app development in this. It makes match the uniformed style of the iPhone or the iPad to be hard. We have compiled the list of 11 free iPhone 4 GUI PSD templates, below is 12 great free Apple iPad GUI PSD templates for designers. All PSDs was constructed using vectors, so it’s fully editable and scalable. Enjoy! 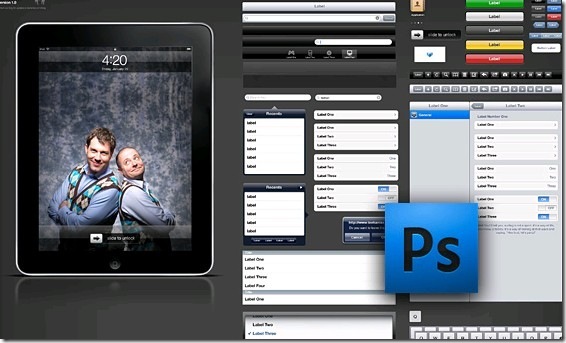 The PSD was constructed using vectors, so it’s fully editable and scalable. You’ll notice there are a few new UI elements as compared to the iPhone interface. The workable screen design is formatted to 768×1024 so anything you design in the Photoshop file can easily be brought over to the SDK.

Design Stencil for iPhone and iPad

All stencils have been originally created by hand from native and custom created OmniGraffle shapes then grouped for ease of use. Stencils can be easily scaled to new point resolutions and exported to any vector formats supported in OmniGraffle. The initial focus is on views and controls provided by UIKit and recommended application styles as discussed in the iPhone and iPad Human Interface Guidelines.

This is the first version of an OmniGraffle template for folks designing iPad apps.

Fully editable Apple iPad in PSD format. Every element you see is editable via vector masks. Everything is scaleable.
Author info: twitter.com/icondesigndk & twitter.com/kevinandersson or visit icondesign.dk

The Apple iPad PSD File File is licensed under the Creative Commons license and can be used for commercial and/or personal purposes.

This version offers a canvas size true to the iPad at 768×1024. In addition to that most of the graphical elements are provided in vector format allowing you lots of room to scale things up for high resolution presentations. This version is also layered in PhotoShop making it easier for you to go nuts with your mockups and client presentations!

Only a iPad in PSD (Photoshop Document).

If you want to design layouts for the iPad, No problem. Here’s an iPad wireframe template for you.

A PSD file of iPad designed by rg-graph.

The iPad: PSD Edition by ~GeminiDesign

The proportions of the screen and the iPad as a whole are calculated to be precise.